An inter house English debate competition was held in the school for standard 7th, 8th and 9th on 1st February 2019. The topic for the debate was Buying things on EMI.

The debate was between the green house and the Yellow house who had reached the finals after eliminating the blue and the red house.

The green house argued for the motion and Yellow house argued against the motion. Both the teams were well prepared and they used various skills and exhibited great oratical power, safeguarded their points by using valid statistic and data. They put in tremendous hard work to showcase their hidden talent. The debaters displayed confidence in presenting the argument before the audience. Where they argued that be it a home or a car or any consumer goods or a vacation just because you can pay the installment does not mean that you can afford it. Ability to pay installment is different from capacity to afford. One of the important message that was passed through the debate was how sometime a special power or privilege turn out into a burden and finally causes downfall of a person who utilizes it.

The key to financial stability is to track and plan while handling it and if you got a boon use it wisely. Listening to the arguments and facts it was very difficult for our judges to choose the winner. Finally the green house was announced as the winner. Debate one of the most important academic activity which provides a platform to student to express what they feel. They just don’t enjoy but also learn a great deal from it. 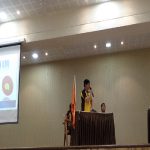 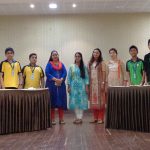