“You can sway a thousand men by appealing to their prejudices quicker than you can convince one man by logic.”

Debate is one of the academic activities that gives students creative room to express what they feel, develop the ability of analyses and synthesize date and cultivate student’s communication skills. The length and breadth of knowledge, that they gain through this is simply beyond imagination.

Sharada Mandir High school has set the benchmark for conducting activities in such a way that the students not only enjoy but also learn a great deal from it. With the same perspective in view, the Inter- School Debate Competition was held on 14th November 2019, on the occasion of children’s day as, today’s students are the future of developing India and the torch bearers of tomorrow.

With the topic chosen for the first round ‘Are reservation good?” (Green house and Yellow house) and ‘Credit card usage boon or bane’ (Blue house and Red house) the final round ‘Farmers loans needs to be waived, for and against speakers from Blue house and green respectively.

The participants argued for the motion and against the motion. The teams were well prepared and they used various skills like overstatement, definition, rhetoric, irony etc. to convince the audience. The participants, armed with statistics and data validated and made their arguments more emphatic with right facial expressions, body movements and gestures of give and take.

The most highlighting part of the event was the audience questioning round were the entire school became a part of debate with a volley of question and answer which were aptly answered by witty speakers that created a lively atmosphere.

The Green house emerged as the winning team with the worthy opponents from Blue house respectively. 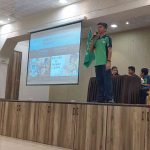 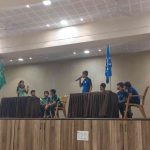 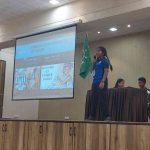 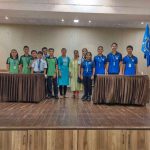